When Amazon unveiled the Halo — a small, plain health-and-wellness wearable — it entered a market already crowded with Apple Watches, Fitbits, Xiaomis, Huaweis, and more. With an empire that spans everything from cloud containers to expensive organic groceries, why does Amazon really want to enter the crowded wearables market? […]

When Amazon unveiled the Halo — a small, plain health-and-wellness wearable — it entered a market already crowded with Apple Watches, Fitbits, Xiaomis, Huaweis, and more. With an empire that spans everything from cloud containers to expensive organic groceries, why does Amazon really want to enter the crowded wearables market?

Certainly Amazon hasn’t been shy of launching new hardware into new markets over the past decade. It cornered the market in ebook readers with the Kindle, made tablets cheap with the Fire range, kickstarted the smart speaker craze with the Echo, and even launched an unloved and quickly binned smartphone. So far, it’s stayed away from wearables devices — that is, until now.

According to tech analyst Gartner, the market for health wearables is expected to be worth $87bn by 2023. The biggest fitness-focused wearable manufacturer, Fitbit, sold 16 million units during the last financial year. Amazon is launching the device six months into a global pandemic, at a time when interest in health tracking is rising.

“As we’ve gone through COVID-19, lockdown and everything else, how people’s perceptions around health monitoring, either explicitly or implicitly, have changed,” says Ranjit Atwal, research director in Gartner’s Quantitive Innovation team. “So what may have been a market for this pre-COVID, there’s likely to be a potentially bigger market post-COVID or even during COVID in terms of people wanting to be more active in monitoring their health.”

SEE: Rural America is in the midst of a mental health crisis. Tech could help some patients see a way forward. (cover story PDF) (TechRepublic)

Atwal says the decision to make a wearable now was likely driven by the potential for putting Amazon’s cloud capabilities, as well as the voice tech that’s been developed with Alexa, to work in a new format.

The Halo is Amazon’s first foray into the wearables market, and comes with all the standard features as well as some more eyebrow-raising additions. Halo users can expect: temperature sensing; activity tracking that monitors both frequency and intensity of exercise; sleep tracking; and a battery life of up to seven days.

Headline-generating new features include a body fat composition feature that works by analysing photos of their bodies that users submit, and a tone analysis feature that “uses machine learning to analyze energy and positivity in a customer’s voice so they can better understand how they may sound to others”. Unlike most competing devices, the Halo also doesn’t come with a screen, an omission Amazon pitches as a way of keeping its users free from what it calls “constant notifications”.

As well as the upfront cost of a Halo, users will need to pay for a monthly subscription of $3.99, discounted for anyone who takes up the Early Access pricing of $64.99 with six months Halo membership included (or $99.99 for the same deal once Early Access has ended). Making money from services related to wearables is very much in this year: Apple recently announced its own subscription called Fitness Plus, which offers workouts synchronised with the Watch for $9.99 a month, while Fitbit’s own Premium service offers workouts, health programs and mindfulness challenges for the same monthly price).

As well as selling direct to consumers, Halo has already found itself an enterprise market: life insurance company John Hancock has added the Halo to the devices it offers to its customers.

Under its Vitality program, John Hancock offers discounts on premiums and other rewards to users that undertake healthy activities such as working out or hitting a predetermined number of steps as measured by their wearables. From 2018, the company announced it would only be offering policies that worked with Vitality.

“We heard from the folks at Amazon, that would have been around the fall of 2018, mentioning that they had seen the work we were doing, and seeing our announcement about offering Vitality on all of our products, and mentioned that they were undertaking some work in the health and wellness space and started talking, and we’ve been collaborating ever since,” says Brooks Tingle, John Hancock president and CEO.

The Vitality program already works with Fitbit and Apple wearables, and from this fall, the program will be rolling out with Amazon Halo devices too. According to Tingle, the decision to offer the Halo as well is about “broadening and deepening” its wearables offering. He cited sleep tracking as one area where the Halo will help fill out what Vitality covers: “Sleep is a critically important factor correlating with longevity and our programme up to this point hasn’t been particularly strong on sleep,” he says.

“Because the Halo is a narrow-profile, lightweight device, we believe that more folks will probably wear it at night in their sleep; the ability for someone to monitor their sleep will be quite good.”

As for what demographics might choose a Halo over an Apple Watch or a Fitbit, the company doesn’t know. However, as to the question on whether wearables-linked insurance really attracts those looking to make lifestyle changes, or already healthy people who know they can cut their insurance spend, Tingle says it’s both.

“Our programme will not work for us as a company if the only thing we do is to attract people that are super healthy to start with. Frankly, there just aren’t enough of them in America for us to fulfil our growth ambitions by just targeting them.” For those looking to make changes, the company says Halo’s Labs features could prove beneficial.

Amazon describes Labs as “science-backed challenges, experiments, and workouts” that users can try out to find new activities and develop healthier habits. Labs have been developed by Amazon’s partners, including Headspace, WW (formerly Weight Watchers), and the Mayo Clinic.

The launch of the Halo is part of a wider strategy that sees Amazon looking to move more towards the healthcare industry. In 2018, Amazon partnered with Berkshire Hathaway and JP Morgan to create a healthcare company called Haven to look after the healthcare of the three companies’ employees. The same year it acquired PillPack, a prescription-drug delivery startup. More recently, it opened its own healthcare program for employees called Amazon Care, and bought Healthcare Navigator, which provides triage and symptom-checker tools, for use in the program.

Several AWS projects are also underway: a transcription service for physicians has been released on AWS, while Amazon has partnered healthcare researchers on projects using machine learning, including Pittsburgh Health Data Alliance on work into cancer diagnostics and other areas, and Beth Israel Deaconess Medical Center on improving efficiency in hospitals.

SEE: The (Amazon) Doctor Is In: Amazon Launches Amazon Care For Employees

Amazon’s approach to healthcare is, says Silvia Piai, research director at IDC Health Insights Europe, “what Amazon does all the time — building the infrastructure and relying on that infrastructure for then having an end-to-end value proposition”.

Healthcare as a market is fragmented, slow moving, and traditionally resistant to economic downturns, making it ripe for companies like technology Amazon to target. “They have already started to think about what they are using for e-commerce or within AWS. These are all assets that can be beneficial, if you start to think about addressing the healthcare market as a whole. That really goes from patient management down to the supply chain of a hospital, so you can bring all the ecosystem together, really. I think that’s scary and interesting at the same time. I see a lot of potential there,” Piai says.

Tue Oct 6 , 2020
NASA has released satellite images showing an unstable mountain slope in Alaska experts warn could trigger a devastating “mega-tsunami.” The mountain slope is located above a fiord called Barry Arm on Alaska’s south coast, which lies around 60 miles east of Anchorage. The slope is partially supported by the Barry […] 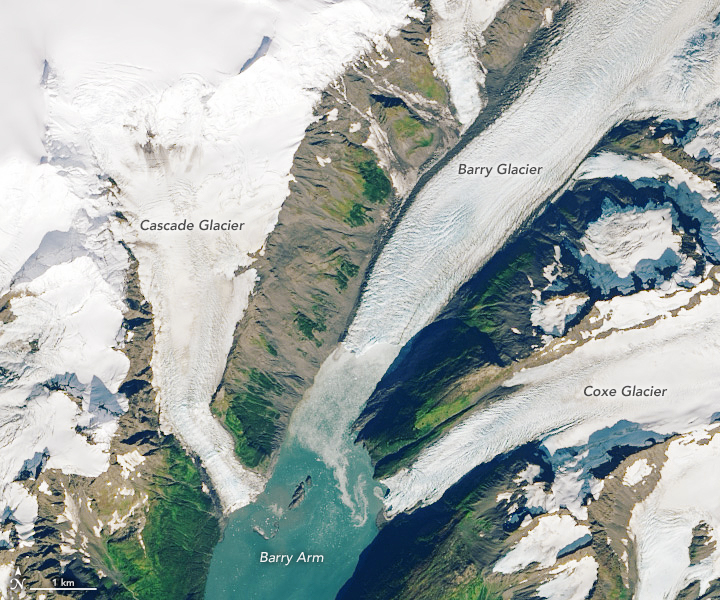