April 25, 2022 Alex Woodie Many IBM i shops are under the gun to modernize their applications as part of a digital transformation initiative. If the app is more than 10 or 15 years old and doesn’t use the latest technology and techniques, it’s considered a legacy system that must […]

Many IBM i shops are under the gun to modernize their applications as part of a digital transformation initiative. If the app is more than 10 or 15 years old and doesn’t use the latest technology and techniques, it’s considered a legacy system that must be torn down and rebuilt according to current code. But there are substantial risks associated with these efforts – not the least of which that the modern method is essentially incompatible with the IBM i architecture as it currently exists. IBM i shops should be careful when evaluating these new directions.

Amy Anderson, a modernization consultant working in IBM’s Rochester, Minnesota, lab, says she was joking last year when she said “every executive says they want to do containerized microservices in the cloud.” If Anderson is thinking about a future in comedy, she might want to rethink her plans, because what she says isn’t a joke; it’s the truth.

Many, if not most, tech executives these days are fully behind the drive to run their systems as containerized microservices in the cloud. They have been told by the analyst firms and the mainstream tech press and the cloud giants that the future of business IT is breaking up monolithic applications into lots of different pieces that communicate through microservices, probably REST. All these little apps will live in containers, likely managed by Kubernetes, enabling them to scale up and down seamlessly on the cloud, likely AWS or Microsoft Azure.

The “containerized microservices in the cloud” mantra has been repeated so often, many just accept it as the gospel truth. Of course that is the future of business tech! they say. How else could we possibly run all these applications? It’s accepted as an article of faith that this is the right approach. Whether a company is running homegrown software or a packaged app, they’re adamant that the old ways must be left behind, and to embrace the glorious future that is containerized microservices running in the cloud.

The reality is that the supposedly glorious future is today is a pipe dream, at least when it comes to IBM i. Let’s start with Kubernetes, the container orchestration system open sourced by Google in 2014, which is a critical component of running in the “cloud native” way.

Google is the most advanced technology firm on the planet, having single handedly developed many of the most important technologies of the past two decades (IBM may own the most patents, but Google has the biggest impact). Starting in the early 2000s, Google created a management system called Borg to corral all the giant clusters that power its various data services, and that eventually became Kubernetes.

While Kubernetes solves one problem – eliminating the complexity inherent in deploying and scaling all the different components that go into a given application – it introduces a lot more complexity to the user. Running a Kubernetes cluster is hard. If you’ve talked to anybody who has tried to do it themselves, you’ll quickly find out that it’s extremely difficult. It requires a whole new set of skills that most IT professionals do not have. The cloud giants, of course, have these folks in droves, but they’re practically non-existent everywhere else.

ISVs are eager to adopt Kubernetes as the new de facto operating system for one very good reason: because it helps them run their applications on the cloud. They want to run in the cloud for several reasons, not the least of which is that the accountants tell them that recurring OpEx revenue is better than one-time CapEx revenue. (Of course, it’s all the same dollars in the end, but we mustn’t question the accountants about their precious codes and practices.)

For greenfield development, the cloud can make a lot of sense. Customers can get up and running very quickly on a cloud-based business application, and leave all the muss and fuss of managing hardware to the cloud provider. But there are downsides too, such as no ability to customize the application. For the vendors, the fact that customers cannot customize goes hand in hand with their inability to fall behind on releases. (Surely the vendor passes whatever benefit it receives through collective avoidance of technical debt back to you, dear customer.)

The Kubernetes route makes less sense for established products with an established installed base. It takes quite a bit of work to adapt an existing application to run inside a Docker container and have it managed in a Kubernetes pod. It can be done, but it’s a heavy lift. But when it comes to critical transactional systems, it likely becomes more of a full-blown re-implementation than a simple upgrade. There are no free lunches in IT.

When it comes to IBM i, lots of existing customers who are running their ERP systems on-prem are not ready to move their production business applications to the cloud. Notice what happened when Infor stopped rolling out enhancements for the M3 applications for IBM i customers. Infor wanted these folks to adopt M3 running on X86 servers running in AWS cloud. Many of them balked at this forced re-implementation, and now Infor is rolling out a new offering called CM3 that recognizes that customers want to keep their data on prem in their Db2 for i server.

Other ERP vendors have taken a similar approach to the cloud. SAP wants its Business Suite customers to move to S/4 HANA, which is a containerized, microservice-based ERP running in the cloud. The German ERP giant has committed to supporting on-prem Business Suite customers until 2027, and through 2030 with an extended maintenance agreement. After that, the customers must be on S/4 HANA, which at this point doesn’t run on IBM i.

Will the 1,500-plus customers who have benefited from running SAP on IBM i for the past 30 years be willing to give up their entire legacy and begin anew in the S/4 HANA cloud? It sounds like a risky proposition, especially given the fact that much of the functionality that currently exists in Business Suite has yet to be re-constructed din S/4 HANA. Is this an acceptable risk?

Kubernetes is just part of the problem, but it’s a big one, because at this point IBM i doesn’t support Kubernetes. It’s not even clear what Kubernetes running on IBM i would look like, considering all the virtualization features that already exist in the IBM i and Power platform. (What would become of LPARs, subsystems, and iASPs? How would any of that work?) In any event, the executives in charge of IBM i have told IT Jungle there is no demand for Kubernetes among IBM i customers. But that could change.

Jack Henry & Associates officially unleashed its long-term roadmap earlier this year, but it had been working on the plan for years. The company has been a stalwart of the midrange platform for decades, reliably processing transactions for more than a thousand banks and credit unions running on its RPG-based core banking systems. It is also one of the biggest private cloud providers in the Power Systems arena, as it runs the Power machinery powering (pun intended) hundreds of customer applications.

The future roadmap for Jack Henry is (you guessed it) containerized microservices in the cloud. The company explains that it doesn’t make sense to develop and maintain about 100 duplicate business functions across four separate products, and so it will slowly replace those redundant components that today make up its monolithic packages like Silverlake with smaller, bite-sized components that run in the cloud-native fashion on Kubernetes and connect and communicate via microservices.

It’s not a bad plan, if you’ve been listening to the IT analysts and the press for the past five years. Jack Henry is doing exactly what they’ve been espousing as the modern method. But how does it mesh with its current legacy? The reality is that none of Jack Henry’s future software will be able to run on IBM i. Db2 for i is not even one of the long-term options for a database; instead it selected PostgreSQL, SQL Server, and MongoDB (depending on which cloud the customer is running in).

Jack Henry executives acknowledge that there’s not much overlap between its roadmap and the IBM i roadmap at this point in time. But they say that they’re moving slowly and won’t have all of the 100 or so business functions fully converted into containerized microservices for 15 years – and then it will likely take another 15 years to get everybody moved over. So it’s not a pressing issue at the moment.

Maybe Kubernetes will run on IBM i by then? Maybe there will be something new and different that eliminates the technological mismatch? Who knows?

For the past 30 years, the mainstream IT world has leapt from one shiny object to the next, convinced that it will be The Next Big Thing. (TPM, the founder of this publication and its co-editor with me, has a whole different life as a journalist and analyst chasing this, called The Next Platform, not surprisingly.) Over the same period, the IBM i platform has continued more or less on the same path, with the same core architecture, running the same types of applications in the same reliable, secure manner.

The more hype is lavished upon containerized microservices in the cloud, the more it looks like just the latest shiny object, which will inevitably be replaced by the next shiny object. Meanwhile, the IBM i server will just keep ticking.

A circular economy for smartphones and laptops

Mon Apr 25 , 2022
Table of Contents1 The e-waste epidemic2 A new model3 Helping companies achieve their environmental goals Where does your smartphone come from? That question doesn’t have an easy answer. Chances are good that the device was assembled in a factory in China, but the materials that went into it likely came […] 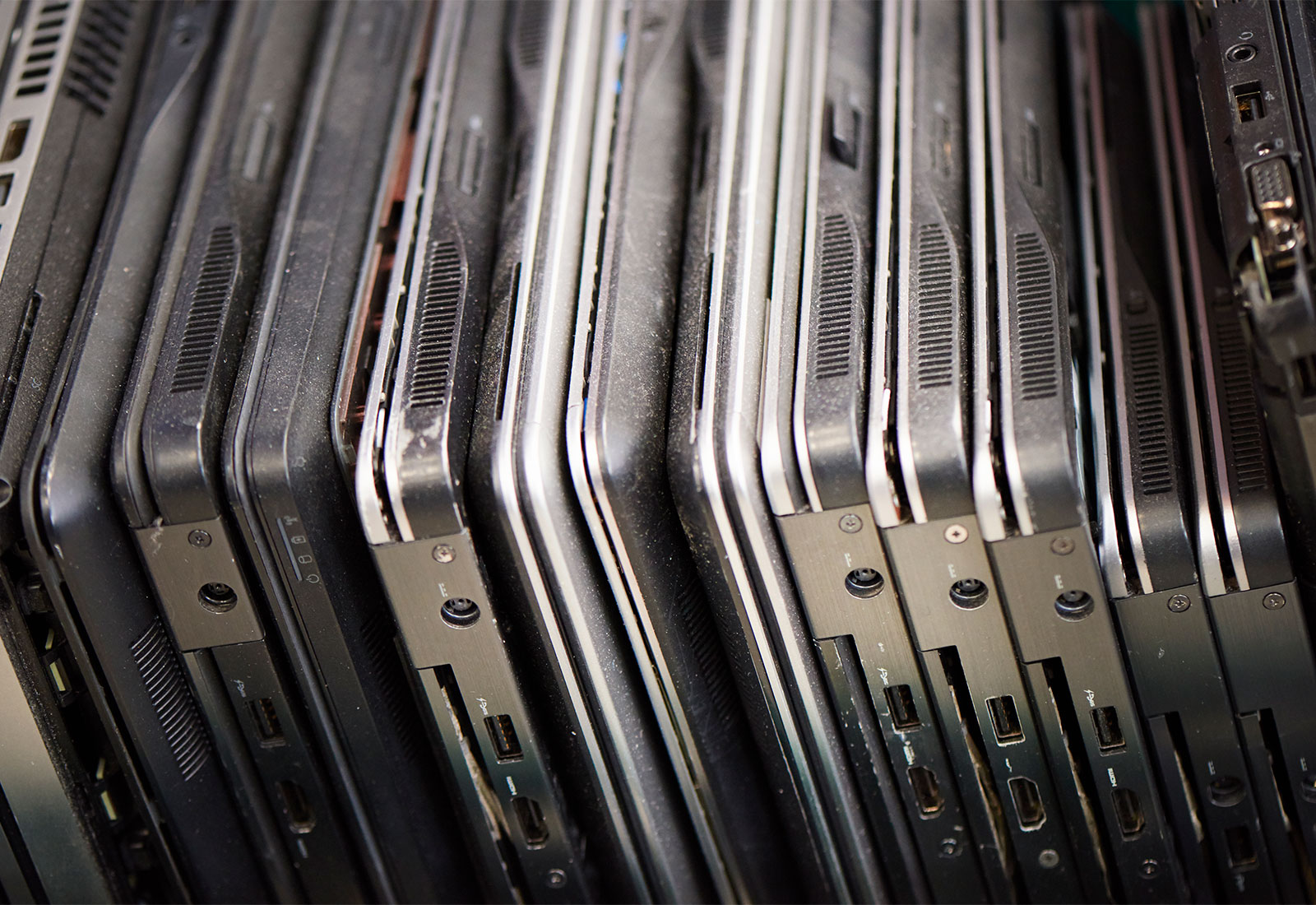