Name: Hand gestures. Age: Older than language. Appearance: Demonstrative hand signals encoding commonly understood meanings. I don’t follow you. Can you give me an example of what you’re talking about? Certainly: placing a fist alongside your head, thumb and little finger extended, in the manner of a man trying to […]

I don’t follow you. Can you give me an example of what you’re talking about? Certainly: placing a fist alongside your head, thumb and little finger extended, in the manner of a man trying to scratch his chin and his ear at the same time.

OK. And what does that mean? Can’t you guess?

What? How do you figure that? It’s miming holding a phone – the thumb is the earpiece, the little finger is the mouthpiece, and the fist is pretending to grab the long bit in between.

You’ve seen a phone, right? I guess it wouldn’t make much sense if you’ve only ever used a flat, rectangular mobile.

You’re correct, it wouldn’t. Give me a better example. Fine. You pretend to write something in the air with an invisible implement.

Am I a teacher, scribbling on a virtual reality chalkboard during a lockdown maths class? No, you’re asking the waiter for the bill.

The waiter? How did I even get to a restaurant? This is hypothetical. You’re just signalling your readiness to write out a cheque.

Write out a what? Or maybe you’re telling the waiter to please tot up the final tally of the bill.

The bill is a computer printout. Are you being ignorant or just difficult?

I think you’ll find it’s my job to be both. Fortunately, linguists have identified your problem: Generation Z has no lived experience of the technology on which these gestures are based. “Emblems that are specific to particular devices will only be recognised by those who are familiar with such devices,” says the language expert Prof Vyv Evans.

Such as old people like yourself. Perhaps. Recently a TikTok video by New Yorker Daniel Alvarado went viral after he filmed his two kids using a flat palm to mime talking on the phone.

Things change, is what you’re saying. It’s a bit more complicated than that.

I don’t think it is. “The thing about gestures is that they are culture-specific and so mean different things to different socio-economic or generational groups,” says Evans.

That’s just a more complicated way of saying it. One more: a police officer pulls you over, approaches your car and makes a cranking motion with one hand. Why?

I know this one: we’re playing charades, and she’s telling me it’s a film. That’s exactly right – good luck to you.

Don’t say: “How many syllables, officer?”

Tue Oct 6 , 2020
Lack of Employee Input & Training Puts Technology and Automation ROI at Risk ARLINGTON, Va., Oct. 6, 2020 /PRNewswire/ — Corporate executives have been investing heavily in technologies such as automation, robotics and artificial intelligence (AI) to reinvent how work is done. But as companies increasingly deploy new technologies, they […] 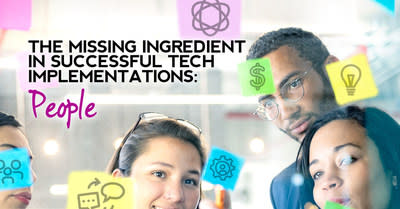