Following a unanimous vote of the Board of Trustees, the Museum of Science and Industry, Chicago (MSI) announced today that Chevy Humphrey, President and CEO of the Arizona Science Center, will succeed David Mosena as President and CEO of one of the largest science museums in the world. Mosena is […]

Following a unanimous vote of the Board of Trustees, the Museum of Science and Industry, Chicago (MSI) announced today that Chevy Humphrey, President and CEO of the Arizona Science Center, will succeed David Mosena as President and CEO of one of the largest science museums in the world. Mosena is retiring at the end of the year after 23 years leading MSI.

The first woman and Black American to lead MSI, Humphrey is a long-time, successful leader in the museum field. She has served as CEO of the Phoenix-based Arizona Science Center (ASC) for nearly 15 years. Prior to being named CEO in 2005, Humphrey served in multiple roles with the institution. Earlier in her career, she gained experience in development with the Phoenix Symphony and two institutions of higher education.

MSI Board Chairman Chris Crane said, “Chevy Humphrey is extremely accomplished and has the energy, background and experience to step right into the job and build on David Mosena’s legacy of transforming the lives of Chicago’s youth through science education. Chevy has been pursuing effective strategies for years in Arizona. We couldn’t be more thrilled that she accepted our invitation to come to Chicago.”

“The Museum of Science and Industry is one of the brightest stars in Chicago’s cultural universe, and we eagerly welcome the historic appointment of Chevy Humphrey as the first Black woman to hold the role as CEO and President. I personally look forward to collaborating with Chevy on new ways to inspire both our young people and visitors of all ages to engage with cutting-edge scientific advances, understand our rich history, and participate in our even richer future as a global leader in innovation and discovery.”

Humphrey is recognized as a leader on national and international levels. She currently serves as Chair of the Board of the American Alliance of Museums, the largest international association of museums in the world. She was selected by her peers as Chair of the Board of the Association of Science and Technology Centers, the organization that serves more than 500 science centers in more than 50 countries.

MSI Trustee Michelle Collins chaired a Search Committee of trustees that led the global search with Koya Leadership Partners, a recruiting firm that specializes in placing CEOs in mission-driven roles.

“We chose Chevy because of her effective, proven leadership skills that make her the right leader for MSI in this next chapter. It is an exciting appointment for a number of reasons, including her track record and commitment to science education, her international leadership within her field, and her deep desire to engage with Chicago’s many diverse communities,” said Collins.

Humphrey, who starts her new job in January, said, “Leading MSI has been an aspiration of mine throughout my career. I am grateful to Arizona and the Center for the opportunity to lead in their community. I am thrilled to be joining MSI and Chicago and look forward to being a part of this iconic institution at a critical time in our country’s history.”

During Humphrey’s tenure at ASC, museum assets grew from $3 million to $42 million, annual revenues grew by more than 200 percent, and the number of annual visitors, onsite and offsite, to the Science Center has more than tripled. Under her leadership, two non-profits were acquired to maximize programming and ASC became a trusted partner to state education leaders and the science teaching community.

Mosena has known Humphrey for years and calls her, “Far and away the best leader I have ever met in the science museum field. We’ve been trading ideas for years and we both share a strong belief that museums are, above all, educational institutions with infinite power to engage young minds and expose them to the miracles of science. Chicago is very lucky to have her.”

The Museum of Science and Industry, Chicago (MSI), one of the largest science museums in the world, offers world-class and uniquely interactive experiences that inspire inventive genius and foster curiosity. From groundbreaking and award-winning exhibits that can’t be found anywhere else, to hands-on opportunities that make you the scientist—a visit to MSI is where fun and learning mix. Through its Welcome to Science Initiative, the Museum offers a variety of student, teacher and family programs that make a difference in communities and contribute to MSI’s larger vision: to inspire and motivate children to achieve their full potential in science, technology, medicine and engineering. The Museum is grateful for the support of its donors and guests who make its work possible. MSI is also supported in part by the people of Chicago through the Chicago Park District. For more information, visit msichicago.org or call (773) 684-1414.

What is QAnon and how are online platforms taking action on it?

Wed Oct 7 , 2020
(Reuters) – Online marketplace Etsy Inc is removing all QAnon merchandise from its site, a spokeswoman told Reuters on Wednesday, the latest in a series of platform crackdowns on the unfounded and sprawling conspiracy theory. WHAT IS QANON?   QAnon followers espouse an intertwined series of beliefs, based on anonymous […] 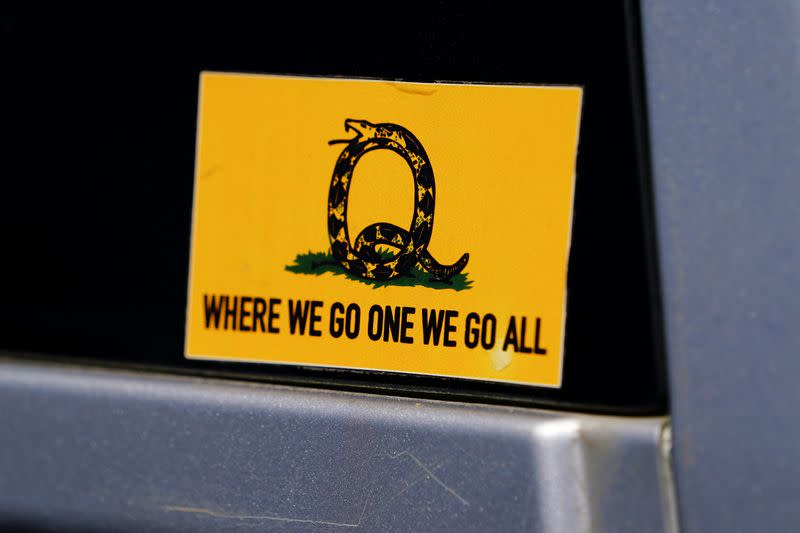