Mobile cryptocurrency wallet BRD announced today that it now has more than six million users worldwide, thanks to strong growth in India and Latin America. With this momentum, the company expects to reach 10 million users by early 2021. Founded in 2015, Zurich-based BRD also said it now adds about […]

Mobile cryptocurrency wallet BRD announced today that it now has more than six million users worldwide, thanks to strong growth in India and Latin America. With this momentum, the company expects to reach 10 million users by early 2021.

Founded in 2015, Zurich-based BRD also said it now adds about one million new users every two months, after initially taking more than four years to hit the one million user mark. It reached 550,000 monthly active users at the beginning of July. Co-founder and chief executive officer Adam Traidman attributes the increased interest in cryptocurrency, especially among first-time users, to the COVID-19 pandemic.

“It’s causing a lot of people who are staying at home and sheltering in place to reconsider a lot of fundamental questions about their life and family right now,” he told TechCrunch. “It’s causing a lot of thinking about money and finances. People have had a lot more time over the last six months to look at their investments and as a result of that, we found that for cryptocurrency in general, but especially for BRD’s business, we’ve been growing dramatically.”

He added that BRD, which has raised $55 million in funding from investors like SBI Crypto Investment and East Ventures, has two main groups of users. The first are millennials who have discretionary income that they invest using apps like Robinhood instead of traditional brokerages. The second group are people who have been more financially impacted by the pandemic and are turning to Bitcoin and other cryptocurrencies to cope with currency fluctuations in their countries or as a more cost-effective alternative to international wire transfers to send money to family members. Falling bank interest rates have also prompted many people to consider alternative places to put their money.

While Bitcoin and Ethereum are still the most popular purchases through BRD, in countries with volatile currency fluctuations, like Venezuela, Argentina and India, interest in stablecoins, which are pegged to the U.S. dollar, is growing. The company is also seeing more adoption in Eastern European countries.

BRD is a non-custodial wallet and cryptocurrencies are stored on users’ devices, which makes it more accessible to users in countries who need to undergo lengthy registration processes to use custodial wallets. The app also allows people to use Apple Pay or their bank cards to buy cryptocurrency. This ease of use is one of the reasons for its growth, Traidman said.

The company’s most recent funding announcement was a $15 million Series B announced in January 2019 for expansion in Asian markets. BRD also offers enterprise blockchain tools called Blockset and says it is currently used to store the equivalent of about $6 billion in cryptocurrencies.

Tue Oct 6 , 2020
The global advanced HVAC controls market size is poised to grow by USD 4.81 billion during 2020-2024, progressing at a CAGR of over 8% throughout the forecast period, according to the latest report by Technavio. The report offers an up-to-date analysis regarding the current market scenario, latest trends and drivers, […] 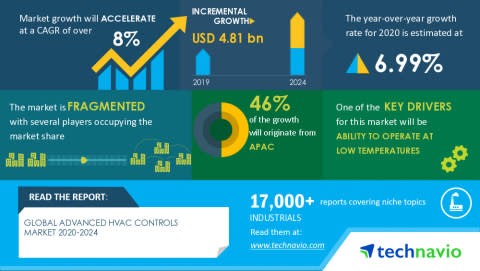