Archaeologists have uncovered a warrior burial in Berkshire that could change historians’ understanding of southern Britain in the early Anglo-Saxon era. The burial, on a hilltop site near with commanding views over the surrounding Thames valley, must be of a high-status warlord from the 6th century AD, archaeologists from the […]

Archaeologists have uncovered a warrior burial in Berkshire that could change historians’ understanding of southern Britain in the early Anglo-Saxon era.

The burial, on a hilltop site near with commanding views over the surrounding Thames valley, must be of a high-status warlord from the 6th century AD, archaeologists from the University of Reading believe.

The ‘Marlow Warlord’ was a commanding, six-foot-tall man, buried alongside an array of expensive luxuries and weapons, including a sword in a decorated scabbard, spears, bronze and glass vessels, and other personal accoutrements.

The pagan burial had remained undiscovered and undisturbed for more than 1,400 years until two metal detectorists, Sue and Mick Washington came across the site in 2018.

Sue said: “On two earlier visits I had received a large signal from this area which appeared to be deep iron and most likely not to be of interest. However, the uncertainty preyed on my mind and on my next trip I just had to investigate, and this proved to be third time lucky!”

Sue, who along with other members of the Maidenhead Search Society metal detecting club had visited the site several times previously, initially unearthed two bronze bowls. Realising the age and significance of the find, she stopped digging and the Club, in line with best practice, registered this discovery with the Portable Antiquities Scheme. (PAS).

The PAS Finds Liaison Officer for Buckinghamshire undertook a targeted excavation to recover the very fragile bronze vessels and, in the process, recovered a pair of iron spearheads suggested that the context was likely to be an Anglo-Saxon grave.

Thanks to their actions, the bowls and spearheads were identified and conserved, and following Sue’s generous donation, are soon to go on display at Buckinghamshire Museum in Aylesbury.

Recognising the importance of the burial and the need for more detailed archaeological investigation, a team led by the Department of Archaeology at the University of Reading carried out a full survey and excavation in August 2020. The burial was at a very shallow depth, making the excavation crucial to protect it from farming activity.

Dr Gabor Thomas, a specialist in early medieval archaeology at the University of Reading, said: “We had expected to find some kind of Anglo-Saxon burial, but what we found exceeded all our expectations and provides new insights into this stretch of the Thames in the decades after the collapse of the Roman administration in Britain.

“This the first burial of its kind found in the mid-Thames basin, which is often overlooked in favour of the Upper Thames and London. It suggests that the people living in this region may have been more important than historians previously suspected.

“This guy would have been tall and robust compared to other men at the time, and would have been an imposing figure even today. The nature of his burial and the site with views overlooking the Thames suggest he was a respected leader of a local tribe and had probably been a formidable warrior in his own right.”

The early Anglo-Saxon period was one of great change in England with significant levels of immigration from the continent and the formation of new identities and power structures in the vacuum created by the collapse of the Roman administration around 400 AD. Around a century later — the period in which the Marlow Warlord lived -England was occupied by local tribal groupings, some of which expanded into Anglo-Saxon kingdoms, such as Wessex, Mercia and Kent.

The region of the mid-Thames between London and Oxford was previously thought to be a ‘borderland’ in this region, with powerful tribal groups on each side. This new discovery suggests that the area may have hosted important groups of its own. It is likely that the area was later squeezed out or absorbed into the larger neighbouring proto-kingdoms of Kent, Wessex and Mercia.

A team involving archaeologists from the University of Reading and local volunteer groups carried out a two-week excavation of the site in August 2020 with the kind permission of the supportive landowner. This activity included geophysical survey, test excavations, and a full excavation of the grave site.

Found buried with the Marlow Warlord were a sword with an exceptionally well-preserved scabbard — making it one of the best-preserved sheathed swords known from the period -made of wood and leather with decorative bronze fittings, spears, bronze and glass vessels, dress-fittings, shears and other implements.

These objects are currently being conserved by Pieta Greaves of Drakon Heritage and Conservation. Further analysis of the human remains will be carried out at the Department of Archaeology, University of Reading, to help determine the man’s age, health, diet and geographical origins.

Michael Lewis, Head of the British Museum’s Portable Antiquities Scheme, said: “This is a great example of archaeologists and metal-detectorists working together. Especially important is the fact that the finders stopped when they realised they had discovered something significant and called in archaeological assistance. By doing so they ensure much more could be learnt about this interesting burial.”

Michael Lewis, Head of the British Museum’s Portable Antiquities Scheme, said: “This is a great example of archaeologists and metal-detectorists working together. Especially important is the fact that the finders stopped when they realised they had discovered something significant and called in archaeological assistance. By doing so they ensure much more could be learnt about this interesting burial.”

The team are now hoping to raise funds to pay for further conservation work, to allow some of the finds to go on display to the public at the Buckinghamshire Museum in 2021, when their newly refurbished permanent galleries re-open.

Tue Oct 6 , 2020
Featured map in the EJAtlas. Credit: Universitat Autònoma de Barcelona An interactive map developed by the Environmental Justice Atlas team at the Institute of Environmental Science and Technology of the Universitat Autònoma de Barcelona (ICTA-UAB) reveals that certain forms of wildlife conservation undermine the rights of indigenous people and local […] 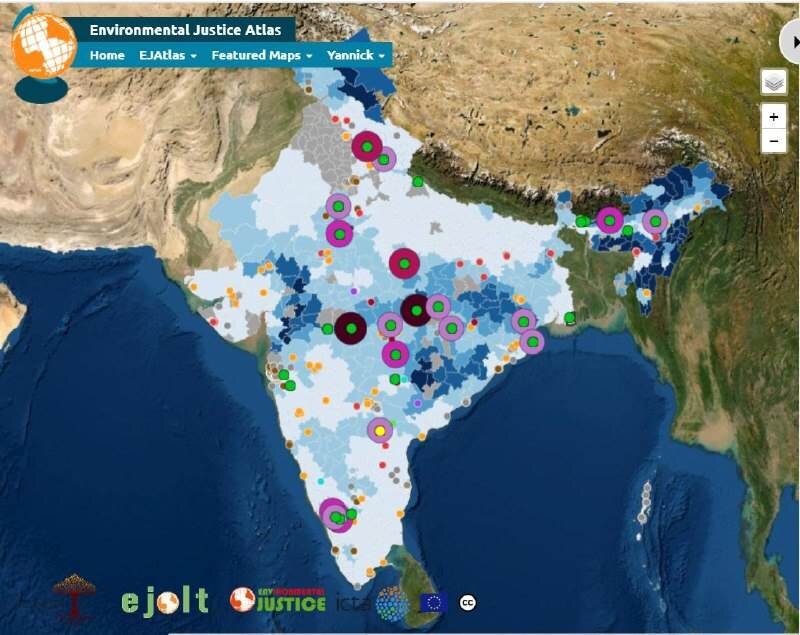