KEY POINTS Apple has been releasing iPhones with notches since the iPhone X A known phone leaker claims the company will shrink the notch for the iPhone 13 This isn’t the first time a leaker has made this claim Apple has a hardware event scheduled for Oct. 13 where it is […]

Apple has a hardware event scheduled for Oct. 13 where it is expected to unveil the new iPhone 12 lineup. But days before the big reveal, a known leaker has already released some details about the iPhone 13.

Noted Twitter tipster Ice Universe, known for leaking reliable information about upcoming smartphones, most notably Samsung’s, recently tweeted that the iPhone 13, which is still far off, will feature a notch “shorter” than the ones in Apple’s current phones.

The leaker first tweeted that the iPhone 13 “continues the notch design” that Apple started with 2017’s iPhone X but claimed that the “notch is shorter.”

The tipster then shared an illustration showing how the notch will look. Have a look at the illustration below:

The leaker didn’t provide any explanation regarding the claim and didn’t mention a source. It’s worth noting, however, that this isn’t the first time someone has claimed that the iPhone will get a smaller notch.

A few months ago, a certain Twitter tipster who goes by the name Fudge leaked a few images showing the alleged iPhone 12 Pro. The image showed a device with a notch smaller than those found in existing models like the iPhone 11 Pro. The notch is believed to be about a third smaller than the current notches and will be very appealing to those who want slim bezels.

While Apple hasn’t confirmed the leak yet, a website dedicated to monitoring the accuracy of various leakers, AppleTrack, indicated that Fudge boasts 90.9% accuracy for 11 rumors. This number may add some weight to the leaker’s claim, but it is still best to take the rumors with a grain of salt.

Now, it remains to be seen whether or not Apple has indeed minimized the notch used for the iPhone’s Face ID cameras. If Fudge’s claim ends up being inaccurate, then at least Ice Universe still has more than a year to be proven wrong.

The iPhone 11 has a big notch. Photo: Pexels / Tyler Lastovich

Thu Oct 8 , 2020
The global 3D printer market size is poised to grow by USD 14.49 billion during 2020-2024, progressing at a CAGR of over 39% throughout the forecast period, according to the latest report by Technavio. The report offers an up-to-date analysis regarding the current market scenario, latest trends and drivers, and […] 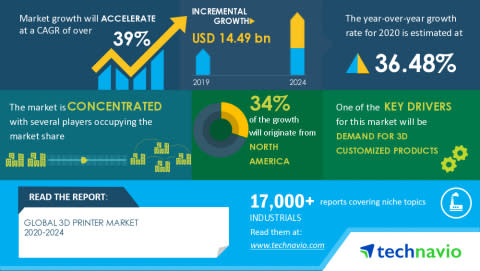