This panorama of the northern sky is composed of 208 images taken by TESS in the second year of its mission. NASA/MIT/TESS and Ethan Kruse (USRA) A series of 208 images captured by NASA’s Transiting Exoplanet Survey Satellite (TESS) over one year reveal a dazzling sea of stars and 74 exoplanets […]

A series of 208 images captured by NASA’s Transiting Exoplanet Survey Satellite (TESS) over one year reveal a dazzling sea of stars and 74 exoplanets in the northern sky, the space agency said in a release Monday. TESS has now imaged around 75% of the sky over two years. The planet-hunter wrapped up its second year of science operations in July.

Astronomers are looking through another 1,200 exoplanet candidates to confirm whether new worlds exist there. More than half of those candidates are in the northern sky, NASA says.

TESS pinpoints planets by monitoring several stars simultaneously over large chunks of the sky and keeping watch for any small changes in brightness. When a planet moves in front of its host star, it blocks some of the star’s light, which leads it to dim temporarily. This occurrence, called a transit, happens each time a planet orbits its star.

“This technique has proven to be the most successful planet-finding strategy so far, accounting for about three quarters of the nearly 4,300 exoplanets now known,” NASA said. “The data collected also allow for the study of other phenomena such as stellar variations and supernova explosions in unprecedented detail.”

In TESS’s first year of operations, it captured a panorama of the southern sky. The northern sky mosaic isn’t as expansive, given that “for about half of the northern sectors, the team decided to angle the cameras further north to minimize the impact of scattered light from Earth and the Moon,” NASA explains. “This results in a prominent gap in coverage.”

This panorama represents just a small part of the data TESS has gathered. The mission divides each celestial hemisphere into 13 parts. Then, TESS uses four cameras to take images of each sector for about a month. These cameras contain a total of 16 sensors called charge-coupled devices.

TESS will now return to imaging the southern sky for a year. It’ll revisit planets it discovered before, locate new ones and fill in any coverage gaps from the first survey. Improved data collection and processing mean TESS will be able to send back full sector images every 10 minutes. The satellite will also be able to measure the brightness of thousands of stars every 20 seconds, in addition to continuing to measure the brightness of tens of thousands of stars every two minutes.

“These changes promise to make TESS’s extended mission even more fruitful,” Padi Boyd, the mission’s project scientist at NASA’s Goddard Space Flight Center in Greenbelt, Maryland, said in the release. “Making high-precision measurements of stellar brightness at these frequencies makes TESS an extraordinary new resource for studying flaring and pulsating stars and other transient phenomena, as well as for exploring the science of transiting exoplanets.”

Tue Oct 6 , 2020
While a cheaper deal is important, UK smartphone consumers are looking at convenience most, even after COVID-19 Just as in other parts of the world, European countries have been hit hard by COVID-19 when it comes to smartphone sales. Our latest Consumer Lens surveys reveal that many consumers here have […] 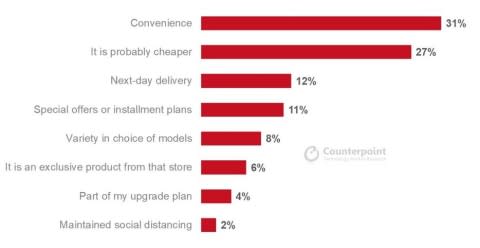