By Sankalp Phartiyal and Aditya Kalra © Reuters/FRANCIS MASCARENHAS FILE PHOTO: A vendor weighs vegetable next to an advertisement of Paytm, a digital payments firm, hanging amidst his vegetables at a roadside market in Mumbai NEW DELHI (Reuters) – Alibaba-backed Indian fintech firm Paytm is aiming for a million apps […]

By Sankalp Phartiyal and Aditya Kalra

© Reuters/FRANCIS MASCARENHAS
FILE PHOTO: A vendor weighs vegetable next to an advertisement of Paytm, a digital payments firm, hanging amidst his vegetables at a roadside market in Mumbai


NEW DELHI (Reuters) – Alibaba-backed Indian fintech firm Paytm is aiming for a million apps on its “mini app store” by the first quarter of 2021, it said on Thursday, seeking to challenge the dominance of Alphabet’s Google in India’s mobile web economy.

Paytm founder Vijay Shekhar Sharma called Google “judge, jury and executioner” after his app was temporarily removed from the Android app store last month for a policy violation. On Thursday, he kicked off his company’s “Mini App Developer Conference” by calling Google a “toll collector”.

Google, whose Android operating system powers nearly 99% of India’s roughly 500 million smartphones, has faced criticism from several startups in the country over a move to enforce its global policy more strictly and charge a 30% commission for in-app purchases.

That criticism led the U.S. tech giant this week to defer by six months its deadline for Indian companies to comply with the new billing system.

Paytm’s Sharma is trying to use the discontent to attract business to his newly launched mini app store, which is hosted within the Paytm app. He has vowed not charge domestic app developers any fees.

Video: What the calls to break up Big Tech mean for Facebook (CNBC)

What the calls to break up Big Tech mean for Facebook

Google did not immediately respond to a request for comment.

A mini application is typically hosted within a bigger app and the user experience may not be as seamless as a standalone app, but it can save app developers the time and money involved in building more complex apps.

Paytm’s mini app store will allow “app developers to, for good, forget about going through somebody else’s kingdom or roads,” Sharma said.

For Google, the face-off against Paytm and other Indian app startups creates a new problem in one of its top growth markets, where it has committed to spend around $10 billion over the next five to seven years through equity investments and tie-ups.

Google has denied any wrongdoing.

“A number of app stores will have to come in this country and co-exist,” Paytm’s Sharma told Reuters.

Thu Oct 8 , 2020
Comparison of the two spectra of Gaia18aen obtained on January 20 and March 22, 2018 together with the identification of the major emission lines observed. Credit: Merc et al., 2020. An international team of astronomers reports that the transient Gaia18aen discovered by ESA’s Gaia spacecraft turns out to be a […] 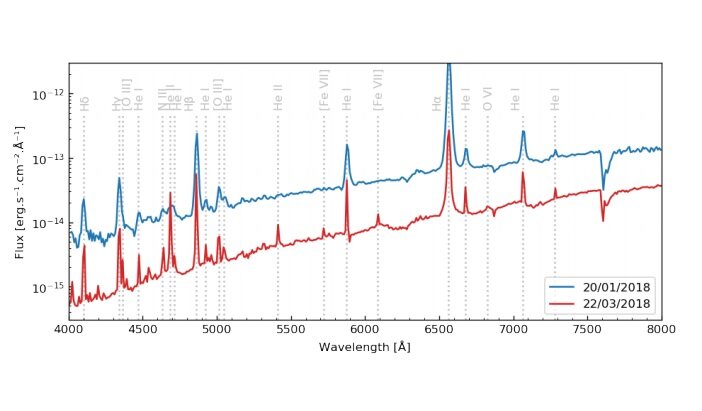