Skilljar co-founders Sandi Lin (left) and Jason Stewart. (Skilljar Photos) The third time really has been a charm for Sandi Lin and Jason Stewart. The entrepreneurs began their startup journey in 2013 when the former Amazon employees launched Everpath, a Techstars Seattle company that tried to build a Yelp for […]

The third time really has been a charm for Sandi Lin and Jason Stewart.

The entrepreneurs began their startup journey in 2013 when the former Amazon employees launched Everpath, a Techstars Seattle company that tried to build a Yelp for online classes. They soon pivoted and began targeting independent instructors, offering them a platform to host online education.

“I call those my first two failed startups,” Lin said this week.

It was the third evolution of the original idea that really took off. Lin and Stewart saw a lot of interest from enterprise companies needing help building customer education experiences. They ultimately launched Skilljar, which has now delivered more than 10 million hours of instruction and 100 million lessons via on-demand and virtual live training programs hosted on its learning management platform.

Skilljar is set to grow even more after raising a fresh $33 million Series B round led by Insight Partners, with participation from existing investors Mayfield, Trilogy Equity Partners, and Shasta Ventures. Total funding to date is north of $50 million. 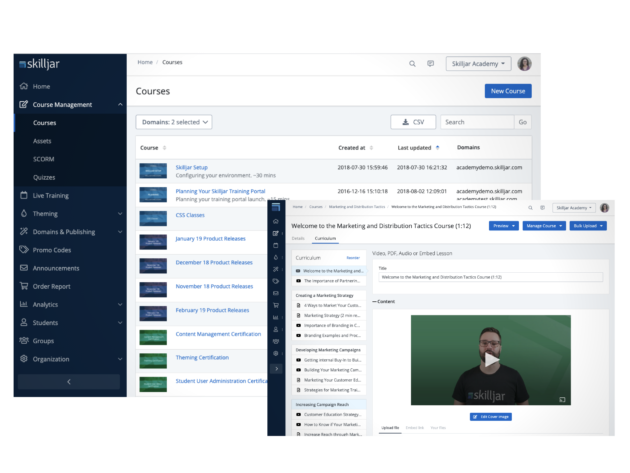 The Seattle startup provides the back-end technology and software that lets companies build cloud-based training and onboarding programs for both their own employees and for end users. The company has more than 300 customers, including Smartsheet, Tableau, Cisco, Zendesk, and others. For example, Tableau uses Skilljar to power its Tableau eLearning training courses, while Nintex taps Skilljar to help lower “how-to” support tickets.

Skilljar also offers a built-in assessment and certifications engine, as well as analytics on learner activity and integrations with various other software tools.

Tech giants such as Amazon and Microsoft have built their own customer education platforms, but Skilljar hopes to provide the same service for thousands of other companies that don’t have the capacity or capability to do so.

Lin said business is accelerating due to the pandemic and the shift to online learning. Skilljar’s customers are looking for a way to reach product users in a world without face-to-face events. Many companies that want to engage with online learning are also “woefully behind” from a tech standpoint, Lin said.

“We didn’t have to raise, but we felt like the timing was right for the next phase of the company,” Lin noted.

Skilljar posted its best quarter in company history during the quarter ending July 31, with a 229% year-over-year increase in new bookings.

Other online education startups such as MasterClass, Skillshare, Thinkific, and more have also raised venture capital in recent months. Global funding to edtech companies reached $4.1 billion from January to July of this year, up $1.5 billion from the same time period a year ago, Crunchbase reported.

“Software-driven Customer Education and training drives meaningful ROI — it leads to both increased adoption and greater customer retention of a product and service while also reducing support costs and need for more expensive in-person training,” Rosenbaum said in a statement.

Skilljar won UX Design of the Year at the GeekWire Awards earlier this year. The 100-person company plans to add another 50 employees this year.

Tue Oct 6 , 2020
The Royal Swedish Academy of Sciences has decided to award the Nobel Prize in Physics 2020 with one half to Roger Penrose, University of Oxford, UK, “for the discovery that black hole formation is a robust prediction of the general theory of relativity” and the other half jointly to Reinhard […]