Commercial banks could become technology firms by cooperating with technology firms, including telcos, to create a new growth space. Le Huu Duc, president of Military Bank, said the bank has decided to highlight digital banking as the focus in its development strategy. Minister of Information and Communications Nguyen Manh Hung […]

Le Huu Duc, president of Military Bank, said the bank has decided to highlight digital banking as the focus in its development strategy. 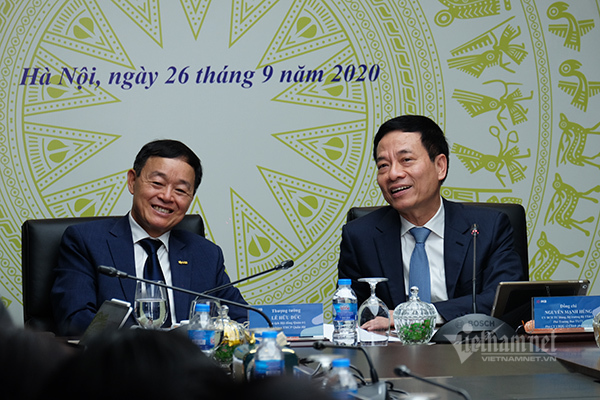 To turn this into reality, Military Bank has cooperated with technology firms such as IBM, Oracle and Viettel in an effort to optimize the digital transformation solution.

The bank has put a digital loyalty point system into operation, which allows users to buy services and exchange points. It has also tried robotic payments, and applied digital signature and electronic authentication (eKYC) on an app platform.

Luu Trung Thai, CEO of Military Bank, said the bank wants to become a leading digital firm in the next three years.

It aims to obtain 10 million clients and double the revenue, 90 percent of which would be from digital transactions.

Thai said the bank is undergoing digital transformation by setting up a specific business unit – digital banking, which is under the direct management of the CEO.

Minister of Information and Communication Nguyen Manh Hung supports the strategy, saying that many other banks and businesses have set up digital business units in certain divisions.

He believes that such traditional ways of doing business will impose old ways on new units.

Another model which Hung believes will also fail is experimental units, because this is just doing things “by halves”.

“An institution has thousands of people, and only a few people will try new methods. These people will taste failure because they are influenced by the majority of the other people,” Hung said.

Meanwhile, other companies are undergoing digital transformation, but are applying it like IT, which is not the same.

That is why many service companies are stating they will become technology firms.

According to Military Bank, one of the most difficult problems is the lack of human resources in data science. Hung said it is difficult to recruit workers because businesses are still following traditional ways.

It is difficult to find people to analyze data, but if setting specific requirements and detailing the works, everyone can do it. In this context, the leaders need to turn the difficult work into an easy task by presenting an explicit topic.

This is a way to solve the problem immediately without having to invite experts from elsewhere.

In order to find a new growth space, some banks are trying to push beyond banking services. However, according to Military Bank, because of the limitations set by the policies, it has found it difficult to compete with fintechs.

First of all, banks need to conduct digital transformation with their current services, and the people who benefit must be loyal clients instead of new clients.

During the digital transformation process, some problems may arise because many things still have not been covered by the legal system.

In order to develop beyond-banking services, Military Bank needs to cooperate with other businesses.

Mobile Money is an example. Banks should consider Mobile Money as a tool that familiarizes people with financial services, thus creating new clients.

“Why don’t banks think of putting Mobile Money into some banking services through cooperation between banks and mobile network operators?” Hung said.

“Cooperating with each other is the way to develop digital transformation,” Hung said.

Nguyen Huy Dung, director of the Authority of Information Technology Application (AITA), said the new banking services don’t start from an ATM or a branch, but from services provided at any time and anywhere, through smartphones.

At present, banks analyse clients’ history of transactions as information to decide whether to lend money. As for technology firms, they make decisions based on assessing the clients’ debt payment capability. This is the big difference in policy between fintechs and traditional banks.

The first thing banks should do is collect data and connect all departments and divisions on a single platform.

Dung cited a report as saying that 92 percent of mobile payment activities in China are implemented through two technology firms, Tencent and Alibaba. He suggested that Military Bank become a digital technology firm.

The Best Computer Monitor Deals to Shop Before Prime Day