*Ujwal Nirgudkar, Oscar Academy Member & Chairman of SMPTE-India* Section who is promoting standards for Digital Cinema in India is now appointed by Oscar Academy to serve on the 2020-21 Science and Technology Council. An Indian Resident is being invited as the Member for the first time in the history […] 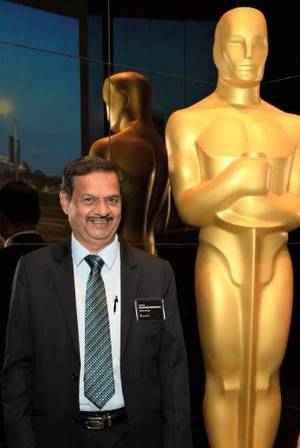 *Ujwal Nirgudkar, Oscar Academy Member & Chairman of SMPTE-India* Section who is promoting standards for Digital Cinema in India is now appointed by Oscar Academy to serve on the 2020-21 Science and Technology Council. An Indian Resident is being invited as the Member for the first time in the history of 17 Years of the council.
*Ujwal Nirgudkar at the Oscar Academy New Member Reception, Academy office, Hollywood*

He is working in the Indian Film Industry for the past 39 Years.Currently, he is also “*Chief Technical Advisor*” from KPMG for “*National Film Heritage Mission*” a 600 Crore project under the National Film Archives, Information & Broadcasting Ministry, Government of India.

During the course of the year, the council will discuss industry liaison activities, general motion-picture technology-related issues, ideas for future Council initiatives and presentations from council members on current technology topics. The council is supposed to have its first virtual meeting on October 12th, 2020 with a brief orientation session for the new Council members. It will be followed by.a group photo-shoot.

The name of Oscar Academy is Academy of Motion Pictures Arts & Sciences (AMPAS). Science behind Cinema is always an integral part of The Academy.

The Oscar Academy’s Science and Technology Council was created by the Academy’s Board of Governors in 2003 in response to the major technological developments taking place in the motion picture industry. Continuing a long-standing precedent of providing an industry-wide center for motion picture technology history, education, and advancement, the Science and Technology Council reestablished the Academy’s role as advocate for technology in support of the art. There are 21 Members of the Science & Technology Council, invited by the Council Executive Committee. Currently following projects are under progress: (1) Academy Color Predictor (2) ACES-Academy Colour Encoding System (3) Colour Transformation Language (4) Digital Motion Picture Archive Project (5) Next Generation Cinema Technology (6) Solid State Lighting Project (7) Spectral Similarity Index (SSI).

On this Ujwal Nirgudkar quoted he is really happy & honored to be invited to join Oscar Academys “*Science & Technology Council*”. The council works on various New Technologies for the Global Cinema Industry. I will get an opportunity to work with the Best and Experienced minds in the Motion Picture Industry. I hope this will also help Indian Film Industry as well. I am looking forward for my first virtual meeting on 12th October with the Council Members with great hopes.

How Did QAnon Conspiracies Spread So Fast In 2020?

Tue Oct 6 , 2020
The increasingly visible and vocal followers of QAnon promote a bewildering blend of unsubstantiated conspiracy theories, worrying everyone from Facebook to the FBI. Once on the fringes of the internet and focused on US politics, the movement has seen sharp growth on mainstream social media platforms this year, prompting tech […]