Express News Service CHENNAI: ‘You don’t love science, you’re looking at its butt when it walks away’ proclaims a favourite Cyanide & Happiness panel. But, Gururag Kalanidhi isn’t one of them. Going by the same panel, he is one of those people who truly love science — ones who “spend their […]

CHENNAI: ‘You don’t love science, you’re looking at its butt when it walks away’ proclaims a favourite Cyanide & Happiness panel. But, Gururag Kalanidhi isn’t one of them. Going by the same panel, he is one of those people who truly love science — ones who “spend their lives studying the tedious little bits as well as the big flashy parts”. From dropping out of a course in Chemical Engineering to making a career (at least for now) in product marketing, his life has taken quite a few turns. Yet, his passion for science has seen him through all these transitions. It’s in the earnest interest to share this thirst for scientific conversations that led him to begin his project — unwanTed Talks.

“The intention is to initiate conversations on science and technology,” begins the 27-year-old. “When you look at things like politics, there’s already a lot of conversation that is happening. People are affected by it in their daily lives and so, take an active interest in it. When it comes to science, it’s a very personal thing — while some people have interest in some domain, a lot of people don’t know what they are missing out on,” he narrates.

With this purpose in mind, unwanTed Talks brings to the stage people from several fields of science; the ones doing incredibly interesting work but that you probably would never get to hear otherwise. In two months and five episodes, his speakers have hit upon subjects like microwave photonics and its applications in telecommunications and defence, DNA profiling and analysis (including products that aid in the detection of cancer), and hybrid propulsion in rockets. 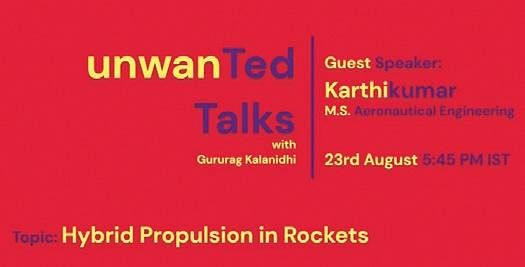 Even as each episode begins with the kind of science that goes right over your head, it still draws you in, hanging on to every word of the speaker and eventually making some sense of it in your head. And that’s precisely the point, says Gururag. “Only when you find something at such an advanced level do you say “Hey, I don’t know this…what is this?” If you’re tuned into a talk and you don’t understand something, the first thing you do is Google it. I want this for folks who come to my sessions. If you don’t understand something, I’m glad you don’t — please go check it out. I don’t want to talk to people who already know what I’m talking about. Then, it’s just bouncing off each other. I want this to go to somebody who hasn’t heard of it and it triggers something in them. That is where change happens,” he elaborates.

Another key aspect driving this change is that the speakers are not people steeped in the field for decades and already have a string of accolades and recognition to their names. They are (for the most part) young people — PhD scholars, research students, scientists just beginning their career and the like. All of them are in very diverse areas of work that doesn’t make it to the mainstream. “This is likely to come to the mainstream only when someone, say, makes a product out of it ten years down the line. Nobody gives them the attention they deserve now; they don’t get a platform to talk. My intent was to get these people onboard and see how their industry is progressing. And all my speakers connected to the fact that STEM study or conversation around it is important, and so wanted to be a part of this,” he explains.

Armed with Facebook Live, Gururag plans to continue to bring scientific conversations from the closed confines of academic circles and peer-reviewed panels to the open forum. Next time around, you may very well find a chemist waxing eloquence about the research into wonder drugs or a deep-sea diver talking about his time with octopuses. So, stay tuned.

Tue Oct 6 , 2020
PayPal’s launching of a Venmo credit card gives it one more way to monetize the peer-to-peer (P2P) payments platform. © TheStreet PayPal Now Has One More Way to Monetize Venmo — and Battle Square It also gives Venmo one more selling point as Square’s rival Cash App grows at a […]